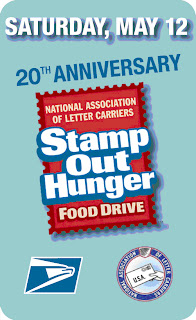 On May 12, local communities across will be asked to join the U.S. Postal Service and its letter carriers to combat one of this nation’s growing problems - hunger.

The Postal Service, the National Association of Letter Carriers (NALC), Campbell Soup Company, Feeding America and other partner organizations are working together to collect food donations on May 12. It is the nation’s largest single-day food drive in local communities across - including Puerto Rico, Guam and the .

In 2011, letter carriers collected 70.2 million pounds of food donated by customers on their delivery routes, which marked the eighth consecutive year the total food collection was at least
70 million pounds.

This year, Nick Cannon is the national spokesperson for the Stamp Out Hunger food drive for the second consecutive year. The drive particularly hits home for Cannon, who experienced hunger and visited food pantries as a child. Cannon will promote the drive on television and radio, as well as in print and social media to encourage even greater participation and donations.

To participate in the 20th Stamp Out Hunger food drive, residents are encouraged to leave a sturdy bag containing non-perishable foods, such as canned soup, canned vegetables, pasta, rice or cereal next to their mailbox prior to the time of regular mail delivery on Saturday, May 12. Letter carriers will collect these food donations as they deliver the mail and take them to their local food bank or pantry.

The Stamp Out Hunger Food Drive began at the local level in the late 1980s and went nationwide in 1992.

For more information about the annual Stamp Out Hunger food drive, visit: www.helpstampouthunger.com.