What Do You Do in Your Spare Time? 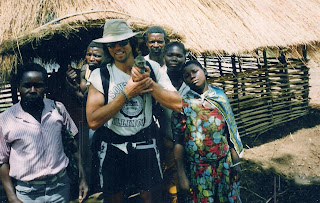 Spare time seems to be a rare luxury these days after a hard week of work. Still, for some, even small bits of spare time can accumulate into large accomplishments. That’s the story behind Bill Hatcher’s new book, The Marble Room.

Bill is the Officer in Charge at the Villa Grove, CO, Post Office. He works with customers every day, often acting as a bartender when customers visit him and go over their problems. He always maintains a positive attitude when it comes to his job and working with customers, no matter the situation. “I learned to try and be forever receptive and happy,” Bill replied when asked how he manages the ebb and flow of customer relations.

The Marble Room is Bill’s first foray into book writing, though he’s been a freelance magazine writer since 2007. The idea for the book originated with his time in the Peace Corps in the 1990’s. During that time, he spent two years in , a country located in , and lived among its people as a teacher. The experience taught him to look at the world differently, and that human interaction is invaluable. When asked about the difference between his life in the and his time in , Bill stated that, “Our souls get lost in things here – things they don’t have in .”

Like many, Bill has a limited amount of spare time to commit to life outside of work. Even with many demands on his time, he still finds the opportunity to contribute to something he has a passion for. Like the bricks that form the structure of a house, Bill assembles his literary building one piece at a time. The end result is something he can be proud of, and others can enjoy reading.

What do you enjoy doing in your spare time? Comment here.