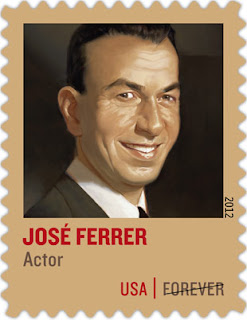 One of our country’s most versatile and honored actors, José Ferrer is the 14th luminary celebrated in the U.S. Postal Service’s Distinguished Americans series. The stamp shows Ferrer at the height of his fame, his elegant and timeless look captured in an oil-on-canvas portrait.


Critics and peers alike lauded Ferrer as one of the most accomplished talents of his generation. Ferrer was not only a highly acclaimed actor, but also a director, writer, musician, and producer. During his long career he garnered many accolades that testified to the depth and quality of his work, including several Tony Awards for his achievements on stage. His film appearances resulted in three Academy Award nominations, including one for what is arguably his most famous role — the swashbuckling poet Cyrano de Bergerac — for which he won a Best Actor Oscar, the first for a Latino.

The original painting for the stamp art was created by Daniel Adel. Antonio Alcalá was the art director.

I have no idea who Jose Ferrer is...

The design of the Distnguished
American series has seen a drastic
change with this stamp and the
Hobby stamp. Now they look more
like cheap sticky labels rather
than a small work of art.