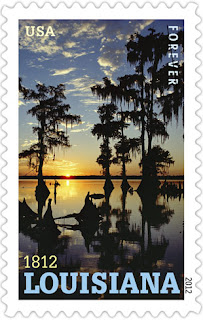 Hello folks, Benny here. I’ve got some information I thought you might find interesting. The Postal Service is issuing a Louisiana Statehood stamp today to celebrate its bicentennial in becoming the 18th state of our country.

Way back in 1778 when I was much younger, and perhaps had a few more strands of hair on my crown, I helped put together the Treaty of Alliance. It was meant to establish a defensive alliance between and the in case the British attacked, and boy did it come in handy.

Well, little did I realize that would offer us more than that treaty just 25 years later. That’s when they gave us the chance to buy the entire for just $15 million. It was such a bargain for so much land, how could we possibly refuse? Eventually, on April 30, 1812, became an official state of the .

Has it really been 200 years already? I guess time flies when you’re on the go. Speaking of which, it’s time for my nap. Until next time friends!