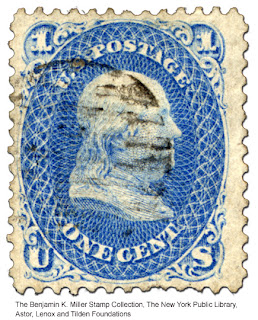 Hello all, Benny here. I was just looking through a photo album of some rare and valuable stamps and I came across a picture of one of my favorite ones of all time – the one cent, 1868 Z-grill stamp.

What makes this particular stamp so interesting to me is its rarity. Of all the stamps produced in 1868, only two of these are known to exist. One is owned by the New York Public Library and the other by Bill Gross. Bill acquired his stamp in 2005 when he traded four stamps worth nearly $3 million for it. Who knew it would be worth so much when it was printed in the 19th century?

Incidentally, besides being one of the rarest stamps in the world, it has one of the most famous people of all time as its subject. See if you can guess who that is.

If you were to start a stamp collection today and could pick just one as your first, which one would it be?