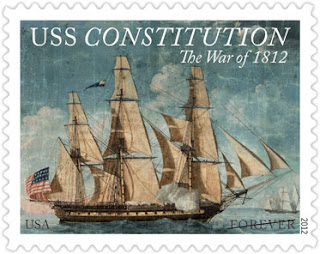 One of the most famous American warships in our country’s history is also the oldest commissioned vessel still floating at sea. The USS Constitution, nicknamed “Old Ironsides”, serves as a museum with a crew of active duty members of the U.S. Navy. This year marks the bicentennial of its victory against the British in the war of 1812.

To commemorate both the bicentennial of a war that gave its identity and the role the USS Constitution played in boosting morale in , the Postal Service will issue a stamp featuring a classic painting of the famous warship. The stamp is scheduled for release this Saturday, August 18, as a Forever stamp.

“Old Ironsides” received its nickname when the vessel engaged the HMS Guerriere on August 19, 1812. As the vessels closed in on one another to inflict as much damage as possible, canon fire from the Guerriere bounced off of the 25 inch thick solid oak hull of the Constitution. Upon seeing their canon fire bounce off of the other ship, one of the Guerriere’s sailors shouted, “Her sides are made of iron!” From then on, the Constitution was known by the nickname earned from this famous battle.

To find out more about the stamp, go to beyondtheperf.com.

To read more about the USS Constitution, go to the official Navy website.

What other famous vessels would you like to see on a stamp?