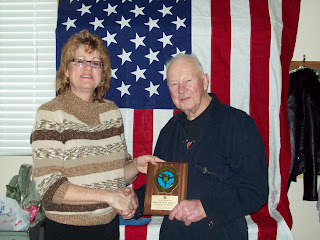 Now this is some kind of story. I'll be telling Mrs. Benny about this tonight when she complains about how I drive the buggy.
Dwayne Raskey started his postal career in Brainard, NE, on Mar. 27, 1959 after two years of serving his country in the Marines. He was a rural carrier associate on the route from 1959 to 1980.
In 1980, after 21 long years, he finally got his own route -- a 92 mile doosey.
But catch this. He's never had an accident in his 50 years of service and recently received the 2 million mile award from the National Safety council.
On top of that, Dwayne hasn't used even a single day of sick leave -- that's going back 50 years!
He walks to work everyday and often rides his bicycle on the trail from Brainard to Valparaiso in the summer which is at least 9 miles.
This is one SUPER CARRIER.. !!! Want to send him a good word? Click here.

Dwayne you make me proud to be a postal worker!

Congratulations, Mr. Raskey!! You are the kind of worker that we should all aspire to be more like!!I bet you have so many stories and have seen so many changes!! Keep on trucking!

The Postal Inspection Service is very proud of you Dwayne. Keep up the good work.

You are amazing, congratulations!!

You are an inspiration! Thank you for your wonderful example.

Dwayne,
Congratulations! You are an inspiration, and represent the USPS very well. Wichita Kansas says "way to go Dwayne".

thats incredible, and admirable, but aren't you at least a little bit tempted by the VERA?