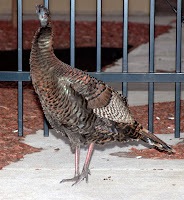 Do you remember the stories about wild turkeys harassing letter carriers?

Well, the retail window may be next. This regal bird was spotted lurking in front of the Minneapolis Main Post Office the other day.

The turkey trotted across the street, hung out in front of an apartment building for a few minutes and then disappeared into a nearby parking ramp.

I have a theory about turkeys and their affinity with anything associated with the U.S. Government. As you recall, I wanted the turkey to be established as our national symbol. Here is what I wrote:

"For truth, the Turkey is in comparison a much more respectable bird (than the eagle,) and withal a true original native of America . . . He is besides, though a little vain & silly, a bird of courage, and would not hesitate to attack a grenadier of the British Guards who should presume to invade his farm yard with a red coat on."

See my previous discusson on my vain attempt to replace the postal eagle with a turkey here.

It seems that no one listened to me ...except the turkeys. And they are still sore about losing out to the bald eage.

And the Postal Service continues to have run-ins with the birds. Read about attempted postal coups by turkeys here, here and here.

How about we call a truce, and replace our current logo with a much-deserved Turkey logo?