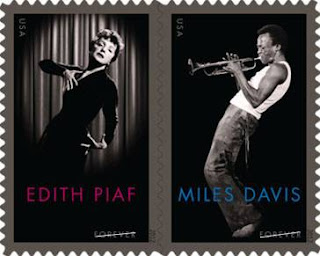 On June 12, 2012, the Postal Service celebrates the musical contributions of Edith Piaf and Miles Davis. The French singer Edith Piaf became well known in the U.S. for singing tragic songs about heartbreak that have been called a French equivalent of the blues.

“If at the end of the song I move my arms as though I'm swimming, it's because when I sang it for the first time I wasn't very sure of the words, so I began to move my arms that way to cover it up.” – Edith Piaf

Miles Davis explored musical styles from bebop through cool jazz, fusion, and funk. He was also a bandleader, inspiring other musicians in his band to future prominence.

“I'm always thinking about creating. My future starts when I wake up every morning. Every day I find something creative to do with my life.” – Miles Davis

For more information in this stamp issue, go to http://www.beyondtheperf.com/stamp-releases/edith-piaf-and-miles-davis

How has music made an impact on your life?