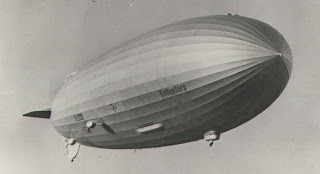 In 1936, the Zeppelin Hindenburg began its service as a transatlantic passenger carrier between Europe and the United States. Spanning the length of 2 ½ football fields, this lighter-than-air vessel transported its passengers and crew across the Atlantic Ocean in 2 ½ days, much more rapidly than the conventional five to ten days for sea going vessels at the time.

Housed within this gigantic vessel was the largest Post Office ever to take to the air. The Hindenburg successfully navigated 34 flights across the Atlantic in 1936, but on its first North American flight in May, 1937, the airship met its tragic end at Lakehurst, NJ. The cause of this accident was never solved.

To learn more about the Hindenburg and its role in history, click here.